Over the last century or so, some information about diet and weight loss has become common knowledge. We all know that a high fat diet leads to weight gain. Some of us know that a high salt diet leads to heart disease. We know cholesterol is bad for us but there’s also a good type of cholesterol. We know that breakfast is the most important meal of the day and that eating three meals a day is healthy. And we know the basic formula for weight gain: calories in > calories out = weight gain.

Now, it turns out, that all of this information was wrong. Some of it came out of research funded by certain interests that had a financial gain in pushing these ideas. Some of it was due to poorly constructed experiments. And some of it was just a lack of knowledge.

Calorie in/calorie out isn’t a good way of looking at diet as all calories aren’t created equally. We now know that you can get fat even if you eat a zero fat diet. You can also get diabetes even if you eat no sugar.

To understand things about diet and weight gain, we need to understand how food is digested. Most of the things we eat are divided into three macro nutrients: Carbohydrates, Fat & Protein.

When we eat, carbs are broken down into glucose. This is used to fuel the body immediately. But we eat more carbs than we can burn instantly. Carbs are also broken down quickly so we get a big boost in glucose after a meal. This extra glucose is stored in the muscles and the liver. If there’s still more left over, it is turned into fat by the liver and stored as fat in the body.

Insulin is released after a meal to help the cells burn glucose. An average diet today is high in carbs. Also, we eat three meals and multiple snacks throughout the day. This means that there’s always a constant supply of glucose coming in and so the insulin in the body always remains high. After a while the body forms a resistance to insulin and so even more insulin is released to do the same job. This is what diabetes is.

If we eat when there’s already glucose in the blood and stored in the muscles and liver, all of that new glucose is going to be turned into fat.

Fats are broken down into fatty acids. These are then absorbed by the fat cells and stored for later use.

Proteins are broken down into amino acids. These are used to form muscle cells but can also be used to produce glucose when the body is low on glucose from carbs.

If we were to eat a meal and then stop and not refuel our body for a long time, first the glucose in the blood will be burned for energy. Then the glucose in the muscles and liver will be used. When we get low on glucose and the insulin level in our blood falls, we get hungry. This is a signal to eat more food to get more glucose. But we don’t have to listen to it.

If we ignore this signal and don’t eat, eventually the body will run out of glucose. Will we die when that happens? Nope. The body will simply turn on the back up generator. It will switch from burning glucose to burning fat. Once this process starts, we will stop feeling hungry. This process usually takes somewhere from 12 to 16 hours from our last meal to start. Once it starts, we are burning fat and losing weight.

But most people never go into this state anymore. This system has evolved to help hunter gatherers survive. Hunting wasn’t easy and there could be weeks between hunts. This is the reason we store fat in the first place. So we can use it when there is no food.

The body actually performs some wonderful things when it enters the fat burning process. Instead of getting lazy and weak, we actually become more focused and strong. Why? Because that’s the time when the hunters need to be at their best. The body also starts autophagy; self eating. It isn’t as bad as it sounds. We actually start breaking down waste products that have accumulated in our cells for energy. Toxins are released and flushed out of the body. The body starts to heal itself.

Think about it, this is such an important part of our body’s functioning, and yet we have completely stopped going into this state in the modern world. No wonder we are getting fatter and unhealthier.

This is why I’ve been doing intermittent fasting for about 7 weeks now. I’ve lost around 7kg in that time. That too without doing a lot of exercise. I don’t feel hungry during the day. My depression seems under control. My mood is better. I don’t feel weak or lethargic. In fact, I’m more energetic than before. Of course, this isn’t a real scientific experiment. This is just anecdotal evidence. But this is what’s happened to me.

I do a 20 hour fast and have a 4 hour eating window. I eat one proper meal and then a few fruits during the day. Some days I eat two meals. This is a more extreme form of intermittent fasting, but I think everyone should always be on the 16:8 intermittent fast at least. That means eating all your meals in an 8 hour window and then fasting for 16 hours. You’ll be sleeping for 8 of those 16 hours so it isn’t that hard. If you can do cardio in the morning in a fasted state, that will help you burn even more fat.

Along with this intermittent fasting, I’m also looking into doing longer fasts. A few weeks ago I did a 36 hour fast. Again, it wasn’t that hard. I would suggest starting a low carb, high fat, keto diet along with a 16:8 intermittent fast before you go into longer fasts. That’s what I did. So my body was already used to getting into the fat burning state pretty quickly.

As of right now, I’m starting a 72 hour fast. A 3 day fast. I’ll write about it here once I’m done. Once you start researching fasting and keto diet, you’ll find there are a ton of pros of doing it and very few cons.

The most important lesson I’ve learned is that traditional wisdom about diet is wrong. We don’t need 3 meals a day. In fact, it’s a really bad idea. We don’t need to eat a lot of carbs. In fact, we can do without any carbs if we want. And fat isn’t as bad as people think. 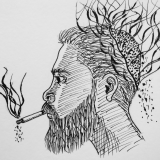